Eddie Nketiah boosted Arsenal’s bid for a top-four finish in the Premier League as the striker’s double inspired a dramatic 4-2 win against Chelsea on Wednesday.

Nketiah was released by Chelsea as a 16-year-old in 2015 and he exacted a measure of revenge with his first league goals this season.

The 22-year-old put Arsenal ahead early on at Stamford Bridge before Timo Werner equalised.

Nketiah settled a pulsating London derby when he punished shambolic Chelsea defending in the second half and Bukayo Saka bagged the fourth with a stoppage-time penalty.

After losing their last three games, Nketiah’s crucial contribution lifted Arsenal back into the race to qualify for next season’s Champions League via a top-four finish.

The Gunners are in fifth place, behind fourth-placed Tottenham on goal difference with both teams having six games to play.

“It’s a great night and the players deserve it. It has been a tough two weeks but you have to bounce back and show spirit,” Arteta said.

“I love the spirit of these players. When you lose matches you get criticised but for these players it is worth it. They are really growing.”

Saluting Nketiah, Arteta added: “What Eddie has done tonight is because of what he has done for the last 10 months and no-one has noticed.

“I said to him I haven’t been fair. I should have been playing him more.”

Arsenal’s hopes of returning to the Champions League for the first time since 2017 face another vital test against sixth-placed Manchester United on Saturday.

FA Cup finalists Chelsea remain in third place, but they are now only five points ahead of Arsenal and cannot take a top-four place for granted.

Chelsea have conceded 11 goals in their last three home games and Azpilicueta’s frustration boiled over in an angry exchange with a fan after the final whistle.

Blues boss Thomas Tuchel admitted he could empathise with the fan’s angst.

“I was not part of it, I saw it, but, honestly, I can also understand the fan,” Tuchel said.

“We had a good start but again gave the first goal away, which is impossible to do these things in consecutive matches. But we’re doing it.

“It’s a level of mistakes, the number of mistakes in consecutive games here at home, it’s impossible at this kind of level. You don’t see this. It has to stop.”

With Thiago Silva and Antonio Rudiger absent from the start, Chelsea’s defending was extremely unconvincing and Arsenal took the lead in the 13th minute.

Andreas Christensen made a hash of his back-pass and, with Malang Sarr caught out of position, Nketiah was able to sprint clear and plant a composed finish past Edouard Mendy from the edge of the area.

Chelsea were hit with a sucker punch in the 27th minute as Xhaka and Saka led an incisive counter from a Blues corner, with Martin Odegaard teeing up Smith Rowe for a low strike past Mendy.

But Arsenal’s defence was just as creaky as Chelsea’s and the visitors conceded again five minutes later.

Ben White’s pleas for a foul by Werner were ignored and Mason Mount whipped over a superb cross for Azpilicueta to slot home from close range.

Tuchel sent on Silva for Christensen at half-time, but the Brazilian’s introduction did nothing to cure Chelsea’s shambolic defensive display.

In the 57th minute, Silva’s tackle diverted the ball towards Sarr and N’Golo Kante, but neither reacted quickly enough to clear before Nketiah poked his shot past Mendy.

Saka delivered the final blow, calmly converting a penalty after Azpilicueta hauled down the Arsenal forward. 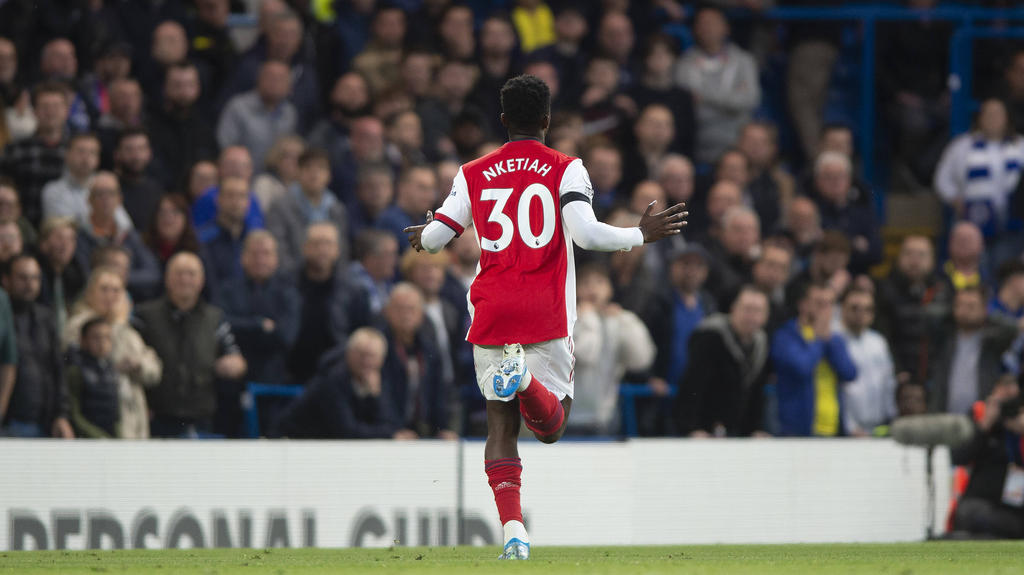